Long term monetizable growth on Instagram depends on your understanding of niches, their four phases, and your ability to pivot between them as your niche evolves over time. If your account has recently stopped growing, the most likely culprit isn’t the algorithm or what hashtags you use, or even whether you’re using Reels (check out my article about Is Instagram dying? to learn more about why). The solution to your growth problems lies in identifying your niche’s phase and taking the corresponding course-of-action (you can read my article on how to find the most valuable Instagram niche for that). By understanding niches and their phases, understanding what you need to do to grow your account will become clear.

They are generally encapsulated by one or several main hashtags that describe and aggregate the content created about that topic. 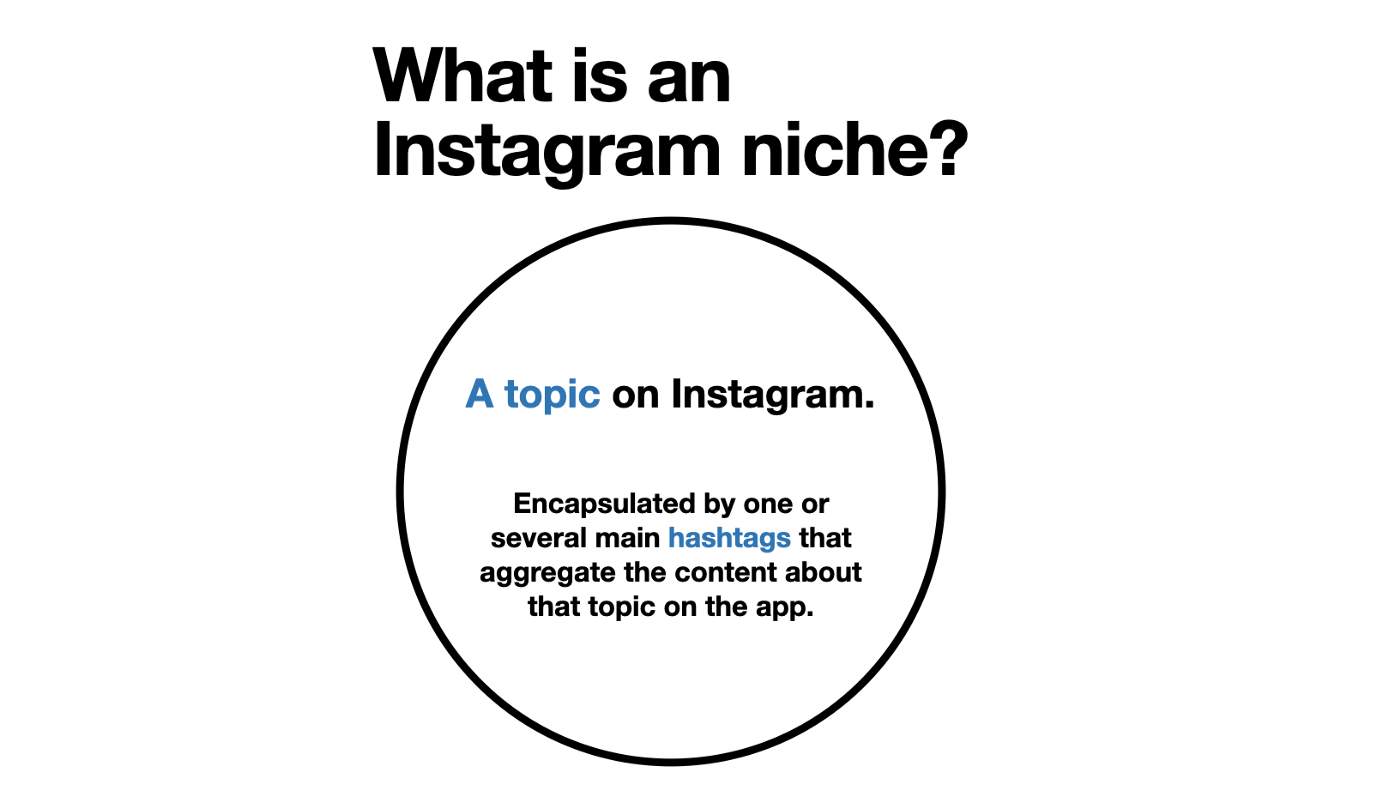 How niches are used

Content creators tag niche hashtags so their content can be discovered by people interested in a particular topic. This generates traffic to their accounts and grows their audience. 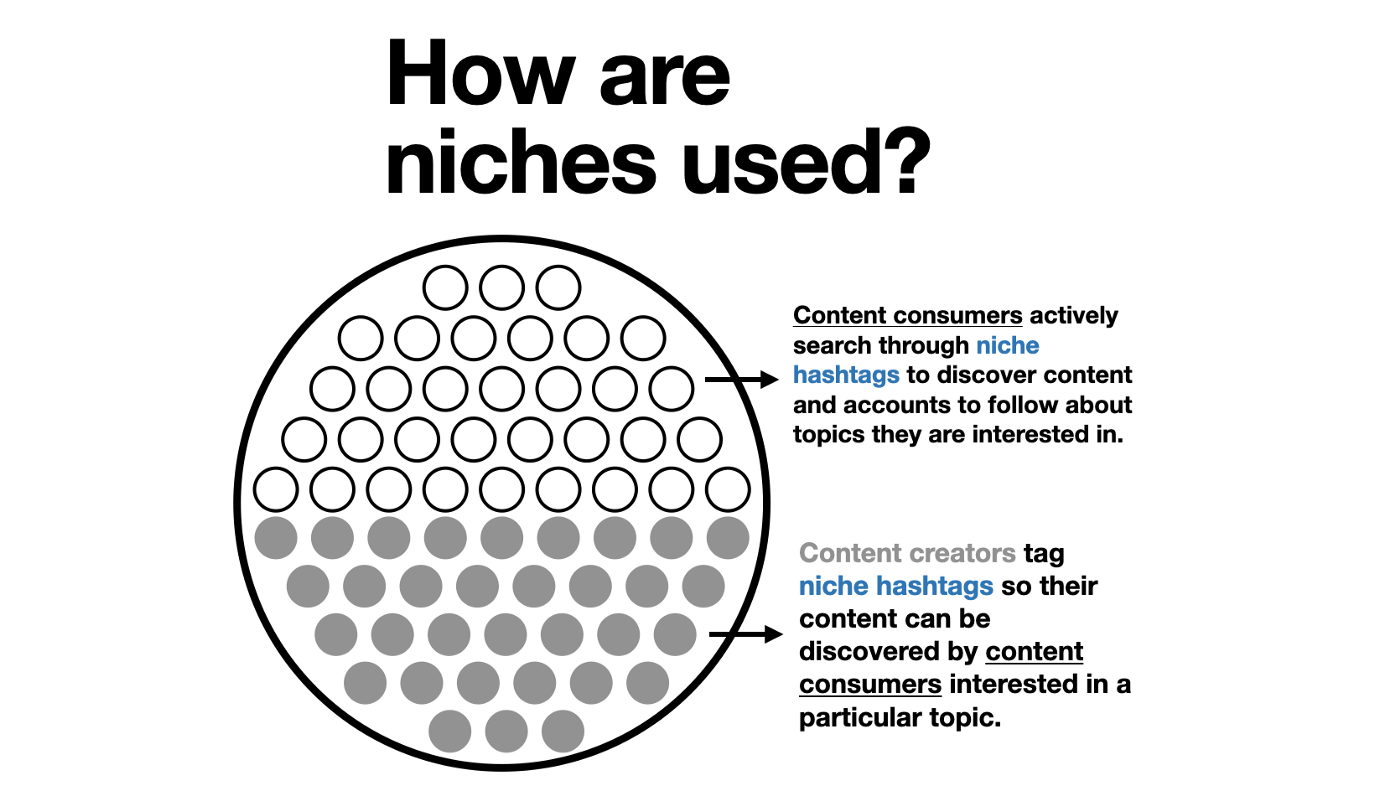 How to measure the size of a niche

The size of a niche is usually measured in two ways: 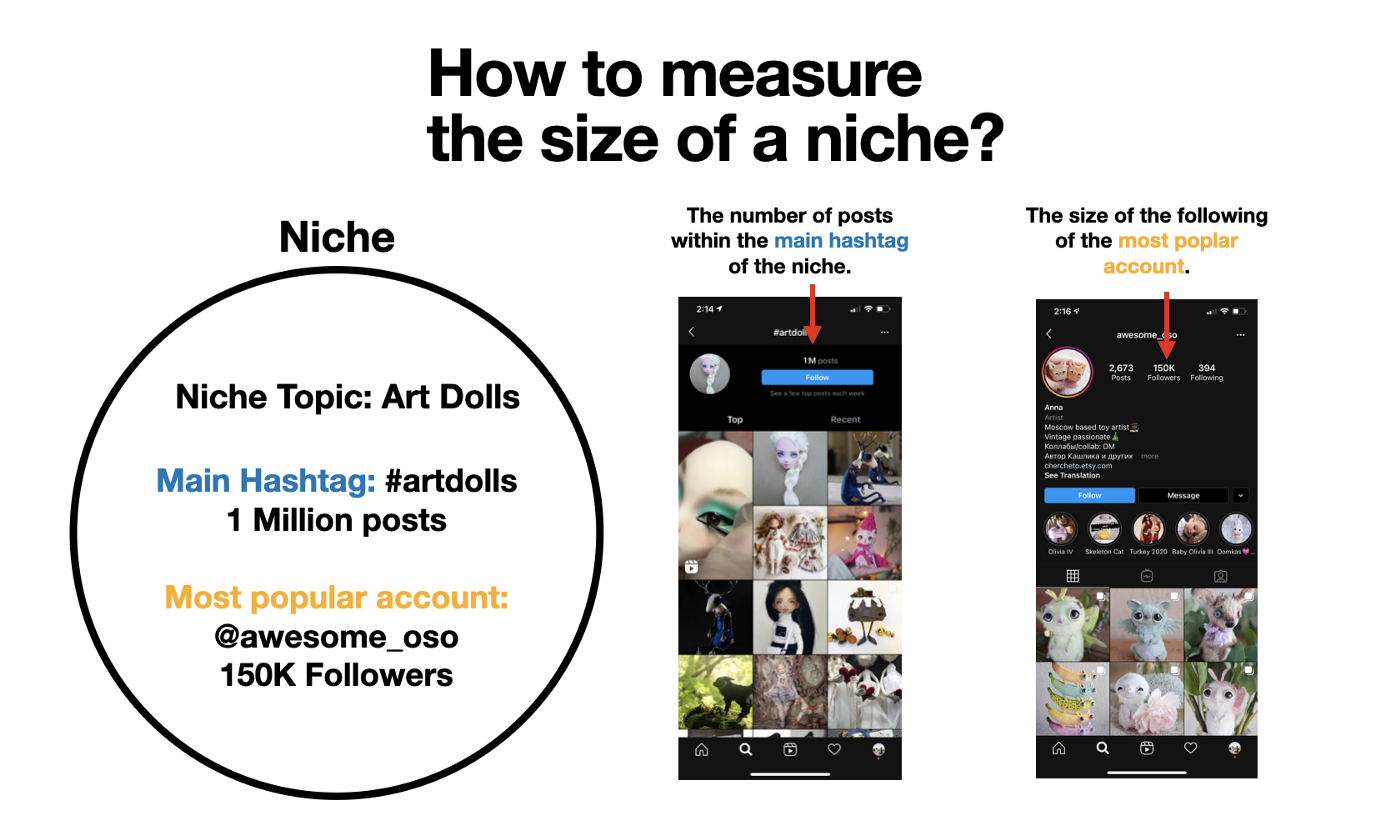 Sub-niches are a sub-topic that only exist within the context of the large topic or a new topic that is created when the topics of two or more niches intersect. 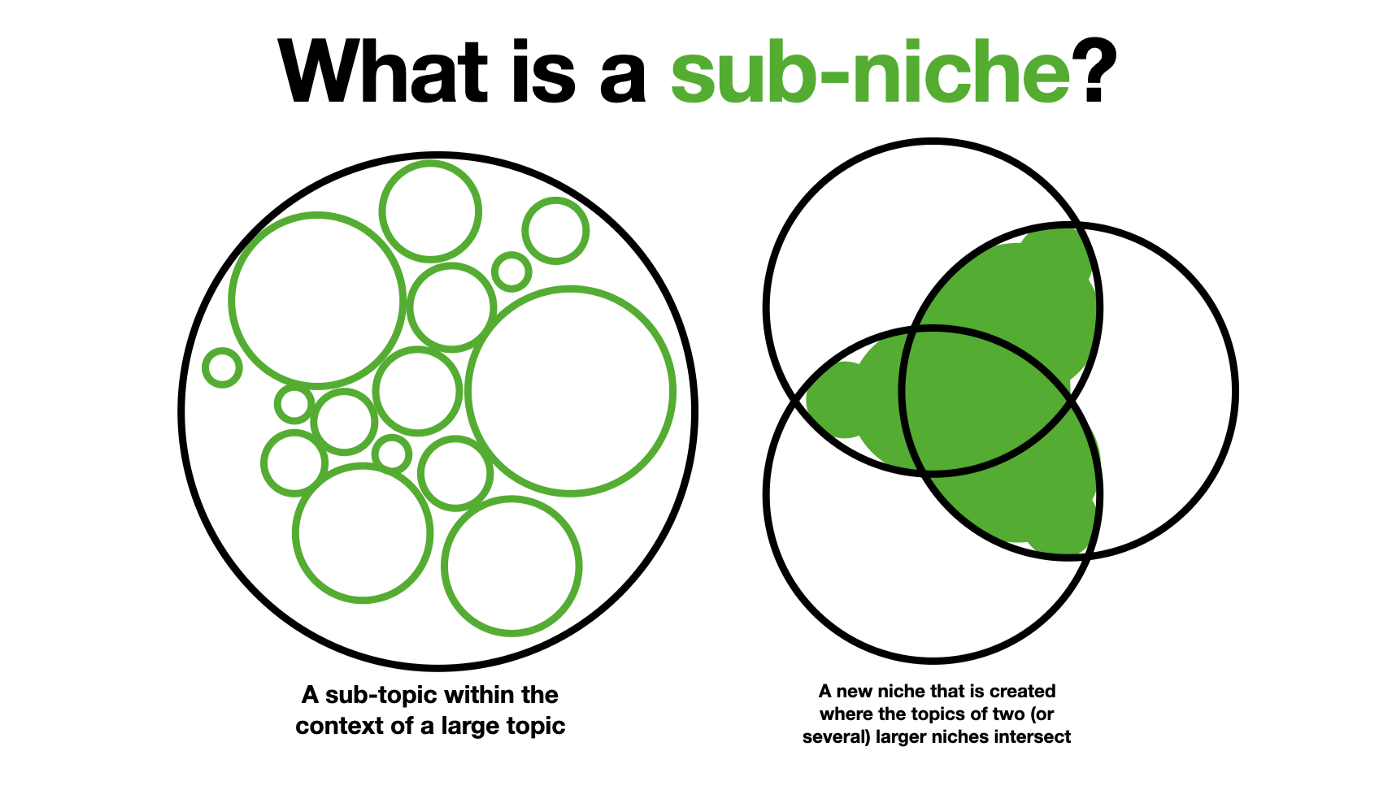 A sub-niche can be created out of an almost infinite number of topics and intersections of topics, so keep your mind open! All of the characteristics of a niche also apply to a sub-niche. See the example section in this article for reference.

The Life Cycle of a Niche

All Instagram niches and sub-niches have a lifecycle that can be broken down into four phases: the Introduction Phase, the Growth Phase, the Maturity Phase, and the Decline Phase.This is how they work.The Introduction Phase: This phase involves the start of a community interested in creating and consuming content about a new topic on Instagram. It’s usually an esoteric interest. Information about the topic and the people in it is limited and it’s considered to be inaccessible to general audiences because it’s so obscure. The number of content creators is very small and the content they create is usually not polished, but the people interested in the topic are very passionate about it. For a content creator, their rate of growth is fast within the community, their content is highly engaged with, but their ceiling of growth is low because the community is so small. 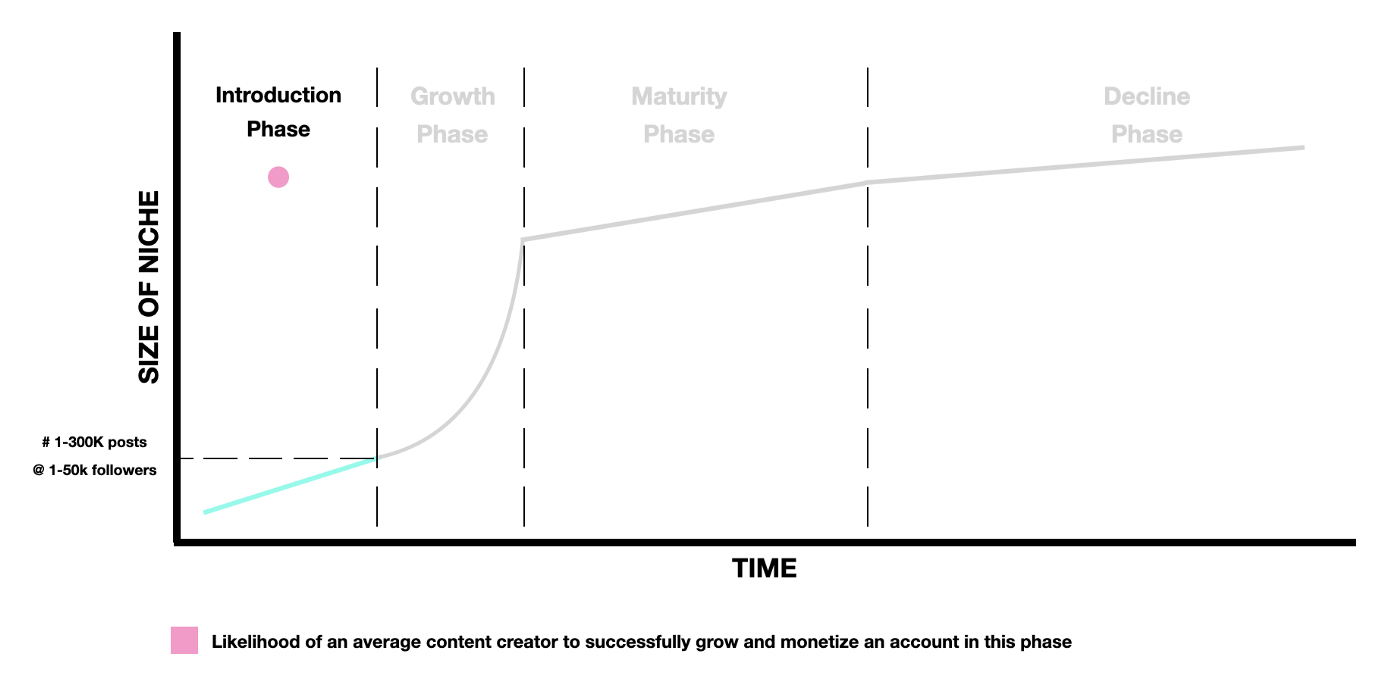 The Growth Phase: In this phase, a previously esoteric topic becomes popular and the number of content creators and consumers in the niche grows rapidly. Professional content creators previously unaware or uninterested in the topic enter the niche in an effort to capture a part of this fast-growing audience. Early-adopter businesses begin sponsoring content creators within the niche, as well as creating products to sell within it. The previously established content creators in the topic compete with new, more professional content creators to attract the largest audience within the niche and monetize it. The quality of the content greatly increases, the algorithm surfaces the content of this topic more, which multiplies the rate of growth of the niche. New sub-topics are developed and new sub-niches in introductory phases are created. For a content creator, their rate of growth is the fastest at this phase but depends on their ability to create highly engaging content about the topic. Their ceiling of growth is higher because the community is growing at such a fast pace. For most people, this is the second-best phase to start an account within a particular niche.

The Maturity Phase: In this phase, interest in the topic begins to slow and decline, and the number of people in the niche grows at a much slower pace or even plateaus. Most of the value is captured by the accounts that became the most popular in the niche during the Growth Phase. The type of content created about the topic is commodified, as a litany of low-quality accounts flood the niche and copy the content style of the large, popular creators in an effort to grow an audience and earn money easily (just as they believe popular accounts did during the Growth Phase.) The competition from an ever-increasing number of content creators trying to capture the attention of a plateaued audience triggers a shakeout period. Growth slows or stops for most accounts creating content about the topic and audiences consolidate around a handful of popular creators who are perceived as the highest quality and most differentiated within the niche. The growth and monetization potential for these popular accounts is unmatchable by newly formed accounts in this phase. Sub-niches within this niche reach their own Growth Phase.

The Decline Phase: The Decline Phase marks the end of a niche’s ability to support growth. Obsolescence and the evolution of tastes lead to a mass exodus of content consumers in the niche. Because of this, the great majority of content creators, even the popular ones, begin to lose followers. Most fledgling content creators stop posting, since the efforts are not worth the return, and move on to other niches. Further consolidation happens towards the few popular accounts left in the niche, but there is no new growth in audiences or money to be made. Sub-niches reach their own Maturity Phase.

Since the number of people interested in topics varies, it’s important to note that not all niches will be able to be accurately measured based on the number of followers of the most popular accounts or the number of posts within the main hashtag. That being said, the characteristics of each phase will remain the same regardless of the size of the niche.

Understanding niches through an example

Let’s use the topic of pottery on Instagram to understand niches. Keep in mind these numbers were true at the time this article was published. They have likely changed by now.

This is one example, but there are an almost infinite number of niches and sub-niches and the great majority of Instagram accounts are in one.

Now that you know what niches are and what phases they have, it’s important to understand which niche and phase your account is in because it is the most important determinant of how much your account can grow over time (if you want to learn the details of the exact activities you should perform to grow your small business, you can check out my Instagram Small Business Class). No matter how valuable or good you consider your content and products to be, the characteristics of niche phases are unchangeable — the Introduction Phase provides the highest likelihood of long term growth (if the niche grows at all) given the lack of competition, as well as the trust you will be able to build with the community. The Growth Phase provides the second-highest likelihood of long-term growth given that its community is rapidly increasing, but the only way to achieve growth is to be one of the accounts that creates the most differentiated and highest-quality content within the niche. There is a very small likelihood of long term, monetizable growth, if you start an account in a Mature niche and slim to none if you start it in a Declining niche.

If you value the time and energy you put into Instagram, it’s important to be realistic about this. Instead of trying to find short term growth hacks that will magically change the course of your account growth, realize that they won’t make a long-term difference and take the correct course-of-action based on what phase your niche is in. Pivot into an Introduction Phase niche or make sure you’re creating the highest-value content in a Growth niche. It’s the only way to truly grow an account in the current Instagram landscape.