THE INSIDE SCOOP • 7 mins

Use Charlie Munger’s Six Cognitive Biases To Improve Your Marketing

8-year old Timmy cried for help! As he woke up in a dark room, to see someone lurking in the corner. His parents came rushing in and turned on the light. Only to see, that ghost was a chair full of clothes. Timmy experienced a visual illusion because of the dark. Like that, there are errors in our thinking called cognitive biases. They distort our reality and make us see what isn’t there. When you decided to click on this article, these biases were pulling your strings from the subconscious. And likewise, they pull the strings of your customers. When people visit your business, these thought patterns determine their opinion of you. If you don’t optimize for these biases, they will act against you. You will lose money to someone who has taken the time to exploit them. In 1995, Charlie Munger gave a lecture on this called “Psychology of Human Misjudgment” and explained 24 cognitive-biases. He developed them through his reading of psychology and market experience. I can’t discuss all of them because of our limited attention span. Out of 24, I will explain six that are most relevant to an online marketer. At the end of each six, I will give you an action-step that you can implement.

Munger says that the human mind is like the human egg. Once an opinion gets in, it shuts itself off to other opinions. People want to be consistent with the conclusions they have made. Even at the cost of being wrong.

This is how the Chinese Brainwashing System worked. They would make people do tiny-actions and declarations. After escalating it slowly, people won’t be able to change the direction of their action. It worked better than the U.S. Torture system. Big businesses are always trying to protect their reputation. Because they know the power of consistency. If the market makes a wrong opinion about them, it becomes hard to change that.

People don’t only go from opinion to action. They also act to pound the opinion into their brain. That’s why people of any political opinion, read what aligns with their opinion. It’s strengthening what’s already there.

Action-step: Look at the opinions of your target niche. Align your marketing with that. Example, excess caffeine can be harmful. But if coffee-consumers believe that it energizes them, quote that. In your marketing, confirm what they already believe.

Once they align your brand with their opinion, strengthen that conclusion. Make them take small-decisions that lead to the buying decision. If you want to sell a $1000-item, make people buy a $10 one. If you want people to buy a $10 product, make them get a free trial. 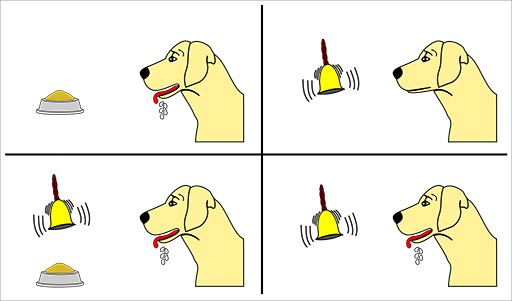 Russian psychologist Ivan Pavlov is famous for his experiment with the dog. He presented the dog with food and dog salivated. Next, he presented the food and rang a bell simultaneously. Later, the dog started to associate the bell with food. And would salivate to the sound of the bell even if no food was there.

You may say that’s obvious but we are victims of it. Munger quotes that “3/4 of all advertising is Pavlovian Association”. In 2019, Gillette made an ad on toxic masculinity. Do you think corporations care about social issues? Not really. They care about profit. But they want you to associate their brand with a social cause. Because you, who support the social-cause will end-up supporting their brand too.

You can try creating a brand story around your marketing but that will take another article. A quick application of this is increasing your price. Let’s say you want to sell more of a product. and you try changing your prices.

According to the laws of economics, Price B should get the biggest market share. But it’s observed that product C will end up having a bigger market share. Why? Because people link price with quality. Like the dog, who linked food with the bell.

Action-step: Being the cheapest in your industry may give you a bad reputation. Increase the price of your best product and see how it sells. People buy my higher-packages easily if there’s a lower alternative present. If you say this won’t work, take a look at why you love expensive stuff.

Humans have an innate tendency to reciprocate what others do for them. Robert Cialdini demonstrated it by going on a college campus. He asked people to take juvenile criminals to the zoo for one after-noon. With this approach, 1 in 6 people agreed. But he changed his approach. First, he asked to take juvenile criminals to the zoo for two after-noons. 100% of people said not. But then he backed off and said, “Would you at least take them for one-afternoon?” With a decrease in his offer, 3 in 6 agreed.

What’s the explanation? The person presumed that he changed his request for their convenience. And they felt tempted to do the same by changing their answer. The need to reciprocate is powerful and a basic thread of society. That’s why when your neighbour offers you their cooking, you feel obliged to do the same.

This is why free-sample works. This is why content marketing works. Why do you think content creators put so much effort into giving you advice for free? Because they know you will return the favour by liking, following and buying. This system works better than ads. And people who don’t have a content marketing system will suffer as ads will keep getting pricer.

Action-step: Build a content channel where you solve the problem of your customer for free. When you give out free content, a percentage of people will repay the favour. An untapped platform for this is Podcasting. I built an audience there in only eight months.

Take your time to choose the right platform. The next step is to give the new audience on your platform a discount coupon or free sample. This will make them feel special and they will reciprocate.

Charlie Munger quotes another Cialdini experiment. Cialdini takes three buckets of water. One’s hot, one’s cold, and one’s room temperature. And he has a student stick his left hand in the hot water and his right hand in the cold water. Then they remove both hands. And put them in the room temperature bucket. Now, both hands are in the same bucket of water but one says water is hot and the other cold.

This shows that contrast runs our sensation apparatus. It doesn’t have an absolute scale. That is to measure one thing, you need another to compare it with. This is true for our thinking apparatus too.

It measures the value of a deal in relative terms. That’s why the price is always $1500 crossed out to $999. Your attention gets anchored on the bigger number. After that, the actual price feels cheaper in comparison to it. You may say I know about it but it happens subconsciously. And is easy to overlook.

Action-step: To apply this, do what Real-Estate agents do. They will show you two overpriced houses first. Then, show you a moderately overpriced house, which they wanted to sell you. Now, you will think it’s a steal deal. If you have a product, introduce a similar version with no extra benefits. But make the price way higher. Now the product that you aim to sell will look favourable.

We humans like to avoid anything that incites doubt. If you clicked on this article, I only had the introduction to ease your doubt. I couldn’t do so for the 50% of people that aren’t reading this line.

Your customers will also have doubts when they first hear about you. When they come across your website, social media, or sales call. Their brain will be itching for them to click away. They will be searching for a reason to stick. If your content doesn’t give them that, they won’t. Not because your content was bad but because it didn’t clear their doubts fast enough.

Action-step: If you are an existing business, you have dealt with customers. You know the doubts and fears of your industry. If you can purpose your content and service to answer those doubts, you can make them stick. You have to predict inner-objections of your customers when they visit you.

For me, the people who clicked on this article had two doubts. “Is this article useful to my business?” I cleared that one up by telling them how they are losing business because of this. Second, “Will I be able to apply it?” I mentioned that there will be simple action steps. If you have read this far, it has worked. If I didn’t, the information would be the same, but you would have missed out.

Munger shares the example of your lovely harmless dog. The only way to get that dog to bite you is to try and take something out of its mouth after it was already there. Similarly, people don’t react equally to loss and gain.

He shares the story of a predecessor, on a little island where he had a house. His next-door neighbour put up a three-feet high pine tree. And it turned his 180-degree view of the harbour into 179 and three-quarters. Well, they had a blood feud like the Hatfields and McCoys, and it went on and on and on.

People can be crazy about minor decrements. That’s why when you play a slot machine, you are always about to win. This is famously known as the scarcity principle. “Hurry, only a few pieces left!”, when you see such messages in online stores, this is why.

Action-step: Show your customers that they were about to win. Try introducing a limited-time offer like 50% off for a year. And make it so that most people end up missing that offer. Now, tell them what they can do to not miss that. It can be an action that favours you, like subscribing to your email lists.

If you read all, you will observe that some biases over-lap. Munger says they are effective when used in combination. If 2–3 biases are active it becomes hard to resist. To someone who’s unknown to these, their subconscious will trick them.

If you want to get better at understanding them, be aware of how these biases play a role in your life. Analyze them every time you see an ad. I recommend the original lecture. It’s gold for a business owner. I will make more articles covering other biases if this one gets a good response.

I know the advice above is manipulative and I may even get some nasty comments. But, this is the reality of consumer behaviour. They are being used against you whether you like it or not. But, If your product or service helps people then ends must justify the means. In the call-to-action below, I put three cognitive-biases, can you recognize them?