Why #MondayMotivation Will Never Go Out of Fashion

The weekend is over, and it’s Monday morning. I wake up, log onto my social media (because why not?) only to find #MondayMotivation trending, again. Imagine waking up to a bunch of posts online inspiring you to get out of bed and run a marathon. Does this sound surprising to you? Well, not for me. It’s almost like an expectation for the hashtag to show up every Monday morning.

The weekend is over, and it’s Monday morning. I wake up, log onto my social media (because why not?) only to find #MondayMotivation trending, again. Imagine waking up to a bunch of posts online inspiring you to get out of bed and run a marathon. Does this sound surprising to you? Well, not for me. It’s almost like an expectation for the hashtag to show up every Monday morning.

Social media trends can never be predicted or influenced in any way. However, #MondayMotivation makes me feel like Nostradamus, as the hashtag somehow always makes its way back on the socials on Mondays. Maybe it’s time to finally roll out of bed.

Let’s begin by answering the most basic question. How did #MondayMotivation even start? After numerous Google searches and reading several articles, I can confirm that there is no conclusive answer. Some state that it has always been there, almost like the sun, or the stars. Others say it was created by a popular celebrity. My theory is that it was created by a student taking online classes since we all know how much motivation that really needs.

We don’t know when it started, however, we do know when it will end. Never. The answer is never. We will be forever stuck in this cycle, where every Monday, without fail, the hashtag will continue to trend online. Think of it as you having the same dream over and over again, except this time, it’s real.

For those of you new to the term, #MondayMotivation is a hashtag used across social media channels like Twitter, Facebook, and Instagram to spread optimism, positivity, and life-affirming messages every time Monday rolls about. The idea is to create an environment where you push yourself to be your best version for the upcoming week or in other words, get sh*t done.

“We Are a Community” Psychology

Emotional contagion has a major role to play here. It is defined as “the phenomenon of having one person’s emotions and related behaviours directly trigger similar emotions and behaviours in other people.” The interesting bit is that this can even be triggered via computer-mediated communication tools like social media. 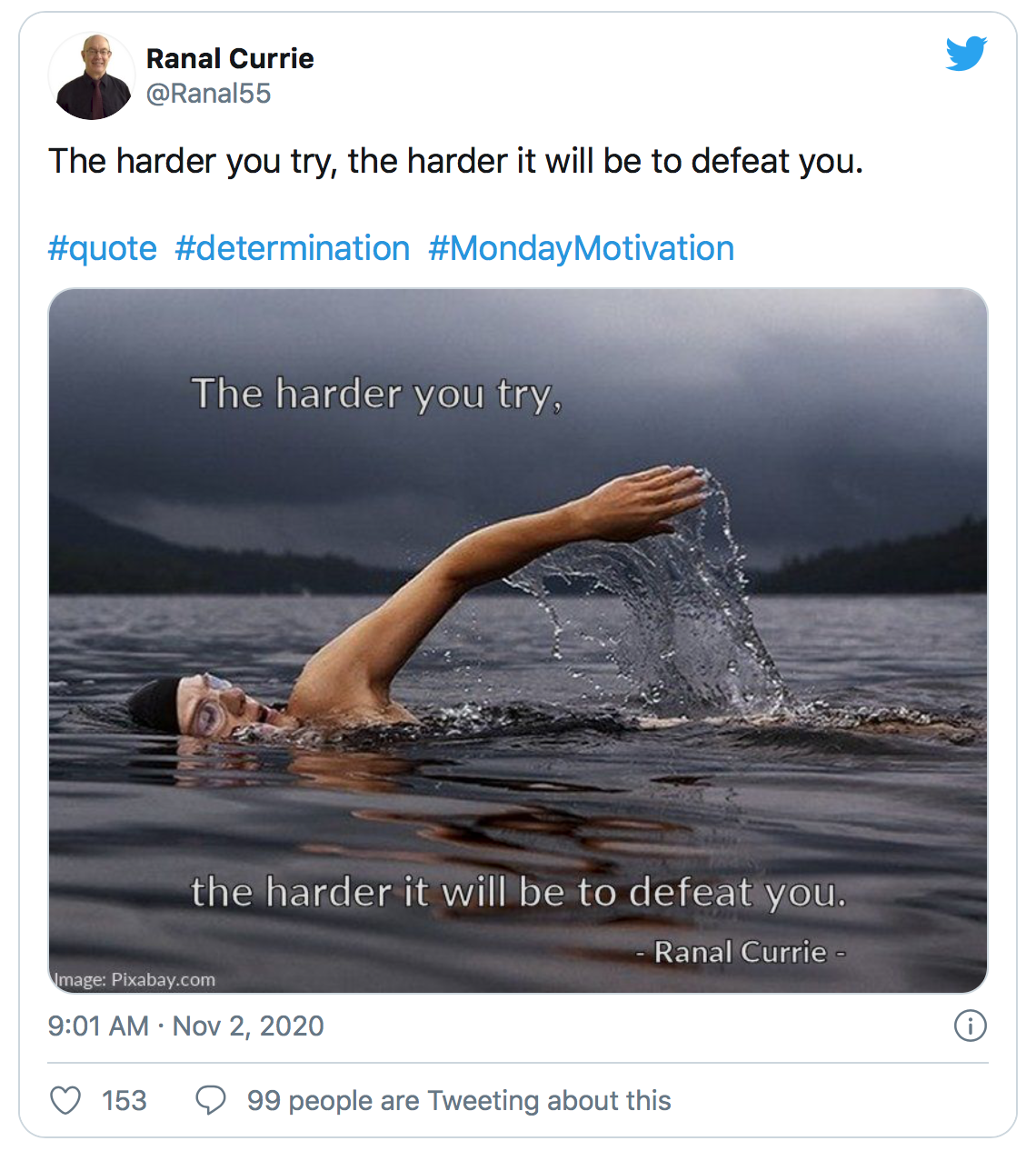 Stieglitz’s research article finds that negative emotions have a greater impact on people. However, in the case of #MondayMotivation, he states that the hashtag can create a community-like feeling among people who don’t actually know each other in real life and therefore have a positive effect.

These positive emotions can be recreated week in and week out since users consistently share stories, quotes, struggles, tips, etc. using this hashtag, which are greatly valued by its viewers for the inspiration it provides. There are many users on social media (if this wasn’t obvious enough already) and they almost always have something to share. Who says no to free motivation?

Marketing AKA Jumping on the Bandwagon

The downside to this hashtag, however, is that people may use this popular hashtag to get attention for their own account or to market their brand. 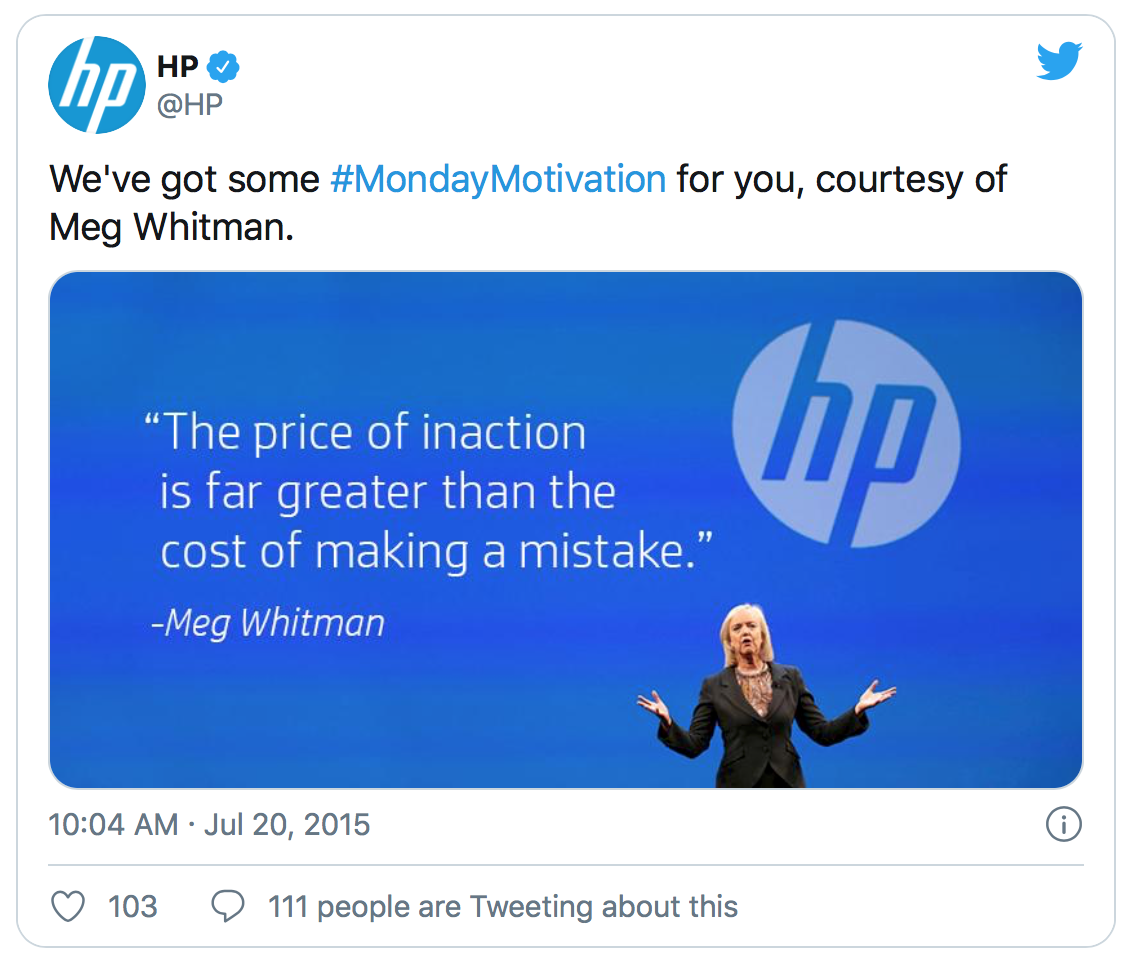 The actual reason the hashtag repeatedly trends is because most brands use it to spread their messages or sell their brand. Understandably, all popular hashtags are used by companies to generate attention for their products. For example, in the case above, HP is trying to educate their followers with a motivational quote that states not taking action is far worse than making a mistake.

The sharing of motivational quotes is scientifically linked to low intelligence, as most intelligent people often spot when such quotes are meaningless or irrelevant. However, most users on social media continue to spread them.

Uplifting quotes online can have a positive impact and be particularly effective when they follow a targeted approach; for example, significant days such as holidays for eating, or stressful times for drinking, etc. In the case of #MondayMotivation, messages associated with a negative mood posted on Monday may perform better than those posted on a Friday or weekend.

Another marketing example can be, “Begin your #MondayMotivation by entering our #New #Competition for #Giveaways to #Win a new watch.” Usage of the hashtag for such sales promotions could diminish the impact of the hashtag itself (unless you really need that watch). The monetization aspect of this hashtag arguably reduces the chances of people being genuinely interested or moved by #MondayMotivation.

From a marketing standpoint, I think this strategy might be successful in the beginning, but in the long term, it might destroy how naturally the communication flows between a brand and its users, potentially resulting in your followers losing interest. It’s almost like a positive hint from a fortune cookie — it never lasts long.

Arguably, this analysis may seem really cynical of a social media trend that, at least, aims to spread positivity. It’s clear that #MondayMotivation has a positive effect on some people (and their brands). If you are among those people who are already inclined to be motivated by inspirational quotes, then the hashtag will do the job anyway. If you’re not, don’t worry, that #FridayFeeling is just around the corner.